This is being shared because stillness in the storm is being blocked by the intentional malware spread in computer systems by people that do not wish for you to discern. 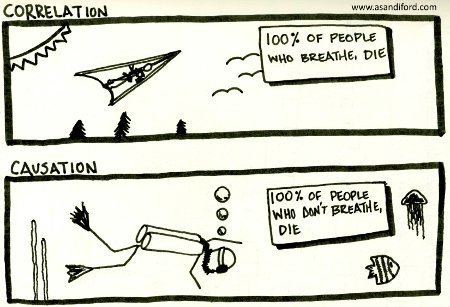 Discernment is arguably the most important skillset we can develop in life. But not everyone consciously understands why they believe what they do. Not all methods of discernment are created equal. Often, we develop a method rudimentary discernment processes early on in life that gives us some answers but might not be the best technique for evaluating claims of truth. Case in point: correlation is not necessarily causation. Correlation tells us if one or more things are present in relation to a phenomenon, but it doesn’t tell us if these related things caused the phenomenon in question. For example, there is a 100% positive correlation that everyone who has ever drunk water eventually died. But this correlation doesn’t necessarily mean that death is caused by drinking water. This might seem like a trivial example, but it highlights how easy it is to make mistakes in discerning the truth when we assume that positively correlated things automatically reflect causation. Given how importance of discerning the truth, an examination of the difference between correlation and causation will be helpful.

There are various theories of knowledge that describe how we come to know the truth, generally referred to as the philosophy of knowledge or epistemology.

We tend to use different techniques for evaluating claims and our experience throughout our lives, depending on what we’re comfortable with. Some people are innately logical and scientific, trending towards a pragmatic or hard data method, reliance on evidence. Others are more intuitive and rely on emotional resonance, which says if a claim resonates with our beliefs if it “feels true” than it probably is. While both approaches can point us in the right direction, reliance on one over another is limiting.

By and large, unless you’re a scientist, work in law, or have an active philosophic mind, you’re likely using correlation and coherentism, which is the easiest and quickest discernment technique insofar as providing an answer, but often the most problematic.

For instance, this method says that if we discover a positive correlation between two things, like drinking water and death, then there must be a causal relationship as well. From here, we just have to come up with an explanation that agrees with what is observed. So long as it is coherent with pre-existing beliefs—so long as it resonates—then it will likely be accepted as true. In the case of water causing death, I might claim that it is an age long conspiracy on the part of some insidious group. And if this agrees with your belief system, you’ll accept it because there’s an observable correlation.

Correlation alone isn’t enough to prove causation. And insofar as coherentism, our beliefs can, and often are, inaccurate. Just because something resonates with our beliefs doesn’t mean it is true. And yet, this is arguably the primary method people employ to discern if a claim, theory, or story is true.

For ages of time, people believed that the weather was caused by gods in the sky warring with each other in epic battles. This explanation fit the beliefs of the cultures that used them, but this doesn’t make them true. “How do we know that the gods create the weather?”—this is the question that begins the process of investigation, the technique of confirming if a theory is true or not by assessing the evidence available to support it.

A positive observable correlation—the fact that two or more things are present when a phenomenon emerges—often leads us to come up with an explanation, which is coherent with our beliefs. The fact that this seems to happen automatically means that philosophic comparison is an innate ability within the human organism. But like all abilities, this needs to be finely honed and mastered.

Whether or not the explanation fits reality is a question that requires a more detailed analysis.

If we don’t know why or how our explanation is true, then we might just be relying on a form of personal dogma. And dogma, by nature, is extrinsic, even if it was intrinsically derived. That is, we need personal first-hand knowledge, we need to reproduce the scene of the crime, as it were, so that we can really know for certain if the things we observed (positive correlations) causally contributed to the manifestation of an event.

Causation, in this sense, is the treasure hidden below the surface of correlation. We discover this treasure, the knowledge of what actually happened, by an epistemological investigation process. By asking how one thread of a story can be proven to be true, what evidence exists to support it, and if that evidence is reliable.

Correlation gives us a trail of bread crumbs to follow. But causation is the actual story of how the bread crumbs ended up on the ground in the first place. The key is to learn how to discover causation, which requires tools of careful analysis, the use of your philosophic faculties and the ability to assess relationships with detail in mind.

Despite the problems of correlation and belief coherence, we shouldn’t throw everything about these techniques away either.

The ability to tell how well something resonates with our beliefs is an important skill to have, as it helps guide us through an exploration of meanings—a philosophic process of improving our knowledge.

When we learn something new, like the fact that cures for cancer exist, this new idea might not agree with our beliefs, it might not resonate. But as many reading these words know, there are indeed cures for cancer, despite this fact being obscured from most people. As such, when we discover that a new idea is true, despite the fact it doesn’t agree with our beliefs, this lets us know we need to unlearn what we have learned. It means our belief system has flaws and we need to do some house cleaning to find out what is untrue, and replace that false knowledge with true knowledge.

Let’s state that again for clarity.

When we learn something new, we’re immediately confronted with having to evaluate this new idea in relation to what we already believe. If the new belief is true but doesn’t agree with our pre-existing knowledge, then the next step is to compare it to our beliefs and rework these beliefs to fit the new truth. Conversely, if the new idea is not true, then by comparing it to our beliefs, we gain greater clarity of how our knowledge is true. Thus, whether a new idea is true or not, the process of comparison and evaluation is incredibly useful—which I call knowledge purification. The overall effect is to strengthen our knowledge.

In the case of cures for cancer, we need to replace the false belief, likely fueled by experiences of listening to expert opinion on TV or in school, with personal knowledge.

In other words, extrinsic belief, blind faith in things other than our own personally derived knowledge, is inferior to intrinsic knowledge. When we’ve done our home work, when we’ve taken the time to personally analyze and assess information, proving it to ourselves, we’ve turned blind faith or dogma into an empowering exercise.

For example, if a friend tells us that a mobster is holding his family hostage and he needs $1,000,000, initially, we won’t have any evidence but their word that their claim is true. And we might pay them in such case if we accept this extrinsic belief. But instead, what if we investigate their claim, asking for evidence, only to discover that our friend’s family is fine and they actually owe $1,000,000 to a Casino for gambling debts.

Without detailing all the beneficial effects of personal evaluation, intrinsic knowledge is always better than extrinsic belief because we know more about the story. Developing intrinsic knowledge requires pouring over raw information ourselves, and in the process, we develop a firsthand account of the issues in question.

If firsthand knowledge is like a detailed photograph, instead of a poor drawing, the knowledge of causation is like a high-resolution image of something observed.

Correlation will tell us an apple and a flask of milk exist in a room, but causation tells us the apple was purchased three days ago by a friend and the milk was left there the night before by your wife. In other words, the story of causation, owing to the fact that proving a cause requires more detailed information, is a complete account of a situation.

Discernment of the truth, which is important for almost everything we do in life, also requires a high degree of detailed comprehension.

We might be tempted to assume that correlation is all the evidence needed to prove a claim, but if we can’t describe what causally happened, we don’t really know for certain.

Someone who knows the truth personally, who has worked hard to develop intrinsic knowledge, can tell you what they believe, how certain they are of that belief, and can prove that what they believe is likely true. And such a person, if they’ve recognized the virtue of humility, will be open-minded, ensuring that as their knowledge and awareness increase, previously held beliefs can be reevaluated to form better explanations.

So in all your truth seeking, strive to go HD.

Work hard to develop intrinsic knowledge, testing your correlated observations to see if a causal relationship exists. This will help you avoid making mistakes as well as enhancing your discernment capabilities, improving lie detection while also imparting the eyes to see more of the truth.

– Justin
The preceding is a Stillness in the Storm original creation. Please share freely.